BBC Arabic edits out key events in the history of Syrian Jews. 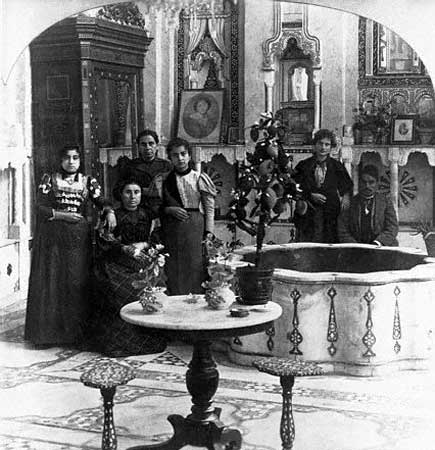 On November 6th the BBC Arabic website reported Vladimir Putin’s reference to Russian aid he purportedly directs at Jews who still remain in Syria and their properties (“Putin helps the Jews of Syria, but where are they?”). The report included a timeline of Syrian Jewry, whose history spreads well over two millennia. This is how it was introduced to the readers (translation by CAMERA Arabic):

“The San Francisco-based JIMENA website, interested in documenting the history and heritage of oriental Jews in the Middle East and North Africa, summarizes the history of Jews in Syria as follows:”

In fact, the timeline is not directly taken from any of JIMENA’s three relevant webpages – two brief summaries elaborating on the history of Syria’s Jews in English and Arabic, and one timeline in English – but it is apparently based on all three. In comparison to JIMENA’s original webpages, the BBC’s version is heavily edited; its anonymous writer added entries that did not appear in any of the three webpages but removed other historical events that were mentioned in all three. For instance:

The BBC’s cherry-picking of historical details – which goes against basic principles of trustworthy quoting and its own editorial guidelines – could have been quite unnoticeable had it been limited to antiquity and medieval times. However, once modern era entries were altered, the history of the Jews of Syria was distorted to such an extent that anyone even slightly familiar with Jewish history of the 19th century could notice at least some of BBC’s edits.  For example:

The way BBC chose to assemble the part of its timeline that deals with the 20th century, based on JIMENA’s webpages, is also misleading and far from perfect. The report made absolutely no mention of several violent attacks against Syrian Jews that JIMENA’s English timeline and summary do document.

By editing out hostilities and atrocities carried out against the Jews of Syria by some of their neighbors and fellow citizens, often with the indirect support of local authorities, the BBC’s timeline whitewashes these ugly episodes from the country’s history. Specifically, by removing the Damascus blood libel from the chronology, BBC also knowingly avoided an opportunity to combat one of the Arab world’s, and particularly Syria’s, most common and venomous antisemitic myths.