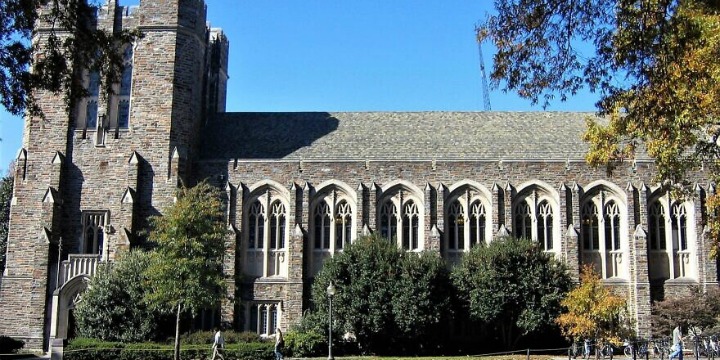 Over the summer, Duke University’s Students for Justice in Palestine (SJP) chapter published erroneous claims about the nature of Zionism in one of its Instagram posts.

According to the ADL, Zionism is “the Jewish national movement of self-determination in the land of Israel — the historical birthplace and biblical homeland of the Jewish people.” But Duke SJP falsely claims that Zionism is the establishment of a sovereign Jewish state in the “country of Palestine.” Not only is this a gross distortion of historical reality, but there was never a country of “Palestine” as SJP refers to it. A Palestinian national identity only formed in the wake of Israel’s founding — not prior to it.

SJP also claims that Zionism can’t be a legitimate movement of national liberation, because Jews are merely a group of settler-colonialists who displaced the “indigenous” Arabs. SJP puts it thusly: “National liberation movements can best be characterized as the struggle of an indigenous population attempting to remove an occupying power and regain its independence. Zionism … is a colonial-settler enterprise based on the mass expulsion of the Palestinian people and the usurpation of their properties.”

This is false. Jews are indigenous to the Levant, and have maintained a continuous presence in Israel even after their exile in 70 AD. When SJP slurs Jews as colonialists, this isn’t just factually wrong, but an antisemitic attempt to paint Jews as alien invaders in their indigenous homeland.

Furthermore, SJP’s “mass expulsion” claim does not withstand scrutiny. Between World War I and World War II, the population of Arabs in the land increased dramatically, due largely to immigration from surrounding countries. Yet, SJP does not dub these immigrants “settler-colonialists”; they reserve that term solely for the Jews who immigrated to the region — a clear double standard. Furthermore, there was no forced expulsion of a single Arab until the 1948 war, which was not started by the Zionists — but instead by the “Palestinians” and five surrounding countries that sought to exterminate all of the country’s Jewish residents.

Perhaps most ironically, certain segments of SJP’s propaganda end up affirming the Jews’ peaceful intentions. SJP charges: “The methods [of Zionism] included promoting mass Jewish immigration and acquiring tracts of land.” How is this damning? Should Jews be shamed for seeking a better life in their ancestral homeland? Is SJP anti-immigration?

The Duke SJP chapter isn’t the only one that decided to use the summer months to push lies.

In one post, the Harvard College Palestine Solidarity Committee wrote that the Nakba, or “catastrophe” — what Palestinians call the Israeli War of Independence — was an attempt to “ethnically cleanse Palestine.”

This claim is plainly false. The main causes of Palestinian flight are still highly debated among historians, and no singular reason has been pinpointed. Many saw the Palestinian elite flee and followed suit. Many were urged to do so by Arab military and political leaders, others tried to escape the fighting, and in some cases, were forced from their homes by the Jewish army — although it was clearly stated by their leaders in July 1948 that “it is forbidden … to expel Arab inhabitants from villages, neighborhoods and cities, and to uproot inhabitants from their places without special permission or explicit order from the Defense Minister in each specific case.” What expulsions did occur were few in number, and do not nearly account for the mass exodus of Arabs from the land.

SJP also conveniently forgets to mention that Israel did not launch this war, but that the Palestinians and five surrounding Arab nations did. Claiming that a country full of Jewish immigrants from North Africa, the Middle East, and Holocaust-torn Europe would try to ethnically cleanse the land of Arabs, who were led by the Mufti Amin al-Husseini, an ally and close friend of Hitler, is a claim that is antisemitic to the core.

My own family’s story highlights the Jewish people’s yearning to return to the land of Israel.

My paternal family immigrated to the United States in the early 1900s, like many other Eastern European immigrants. Hailing from Ukraine, Georgia, Poland, and the Russian empire, they arrived at Ellis Island at the same time as the Second Aliyah, a period from 1904-1914 when many Eastern European Jews moved to what is now Israel.

My mother’s family remained in Europe for longer. My maternal great-grandfathers, both of whom were Romanian, followed Theodor Herzl’s Zionist vision and purchased land in Israel, hoping to one day thrive there. My mother’s father spent World War II in a concentration camp in Transnistria, and settled in France only after he escaped. He would later visit Israel and lay eyes on the plot of land that had been purchased by his family, yet had never been inhabited. By contrast, my maternal grandmother’s family did make it to Israel after World War II. Her parents spent a year at an internment camp in Cyprus, her mother falling ill with typhus. Eventually, they settled in Israel, and my grandmother served in the IDF for a year. After a few years, they went back to Europe, where my grandmother met my grandfather in Paris.

The flame of Zionism and connection to Israel is something that will never be extinguished in the Jewish people. My family’s story is just one of many. The desire to return to Israel has been shared by European, North African, Middle Eastern, Ethiopian, and Yemenite Jews, and is still present today. Aliyah from France has ballooned in recent years, and some 2,000 members of the Ethiopian community will make aliyah in early 2021.

Although SJP’s attempt to erase Jewish connection to the land of Israel is a minute hurdle compared to what we have endured throughout the last two millennia, it should not go unnoticed on Duke’s campus.

Ben Stone has been a CAMERA on Campus Fellow for the last two years. As a Duke Undergraduate, he studied Evolutionary Anthropology and Decision Sciences and is now completing his Masters at the Fuqua School of Business. He is also a varsity fencer and has competed nationally and internationally for over 10 years, including at the 20th Maccabiah Games in Israel, where he brought back Gold with Team USA.